As you probably know, the 2020 elections are not over yet. Two contests remain: the two Georgia Senate seats, which will determine which party controls the Senate for the first two years of the Biden/Harris administration. In those two years, we can either witness actual grownups begin to govern this country again for the good of all, or watch Mitch McConnell obstruct everything we need to be doing.

Here are some good groups working on the ground in Georgia. Most of them are looking for both volunteers and monetary donations. Please give and do what you can in order to complete and ensure the national repudiation of Donald Trump.

Update: In these final weeks of the campaign, a new way of helping to secure the vote has arisen that might outweigh all the others. Thousands of submitted absentee ballots are being rejected because of small errors in the forms, but voters whose ballots did pass muster have until three days after the election to correct those problems and have their votes counted after all. The Georgia Democratic Party is mounting a phone banking effort to reach those voters, let them know about the problems with their ballots, and help them make the required fixes. These are the easiest kinds of get-out-the-vote calls to make, because you're not having to persuade anybody how to vote or whether to vote. They've already decided to vote, and you're just helping them make sure their votes will be counted.

This community affiliate of the AFL-CIO has the most effective voter outreach program I know of. They don't just blast out messaging cold turkey. Rather, they engage people in a gradual process that begins, not with politics, but with providing them information in areas important to them, such as how to file for unemployment benefits, or get a Covid test, and so forth, building a relationship with them before saying a word about elections. They also perform constant testing of their own methods and messages, experimenting to see what works best. They made a huge difference in the November elections, and seem likely to do so again in the Georgia special elections.

This is a new group taking a novel approach that's based on research into the most effective ways to get people to vote. They pay a small sum to "Voting Ambassadors" in majority-Black neighborhoods, who then recruit "Vote Triplers", friends who promise to get three other friends to vote. Because this group is working in a very new area, there's a chance your contributions to them will have a bigger effect than if you donated or volunteered for the campaigns themselves, which are already taking in millions of dollars from all over the country.

I've recommended this group before, and their work to help expand, staff, and monitor Georgia polling places will be just as important in January as it was in November. We  need to not only register new voters and get them out to vote, but to improve and protect the voting process itself. You can both donate to and volunteer with the Georgia ACLU. 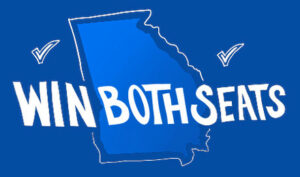 Finally, #WinBothSeats is a list of other worthy groups compiled in part by Andrew Yang (who has moved to Georgia along with his wife in order to personally help with the effort) and Martin Luther King III. 100% of your monetary donations will be divided among a "vetted group of effective Georgia organizers", and many of the groups can use volunteer help as well.

I know we're all relieved over the outcome of the November election and looking forward to the return of normalcy in 2021, but that won't really happen unless we can retake the Senate by winning these two Georgia seats. Let's make that one final push!