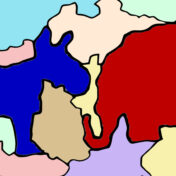 This is the first of a series of posts I'll be making about how political positions we hold compare with the policies of the other countries of the world. Often, the propaganda of the political parties within this country can give us a distorted view of what's normal, and the "echo chambers" that we create for ourselves through our social media circles and our choice of news sources can distort that view even more.… [more] 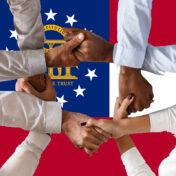 In the course of the protests sweeping our nation, police in many cities transformed potentially incendiary standoffs into powerful visions of unity and hope by kneeling, marching, and mourning with the protesters they swear to serve and protect. Not all of them maintained that stance, but many did. I've written this anthem to celebrate the moments they created. It can be sung to the tune of our national anthem.… [more]

A favorite post-election activity in America is for the supporters of the loser to claim that the election was rigged. Unfortunately, many of them are not very good at it. As a public service, I've created this guide to proving Election Fraud.

If anyone's confused by Trump's behavior in the face of the Coronavirus threat, here are the three keys for understanding anything he does: