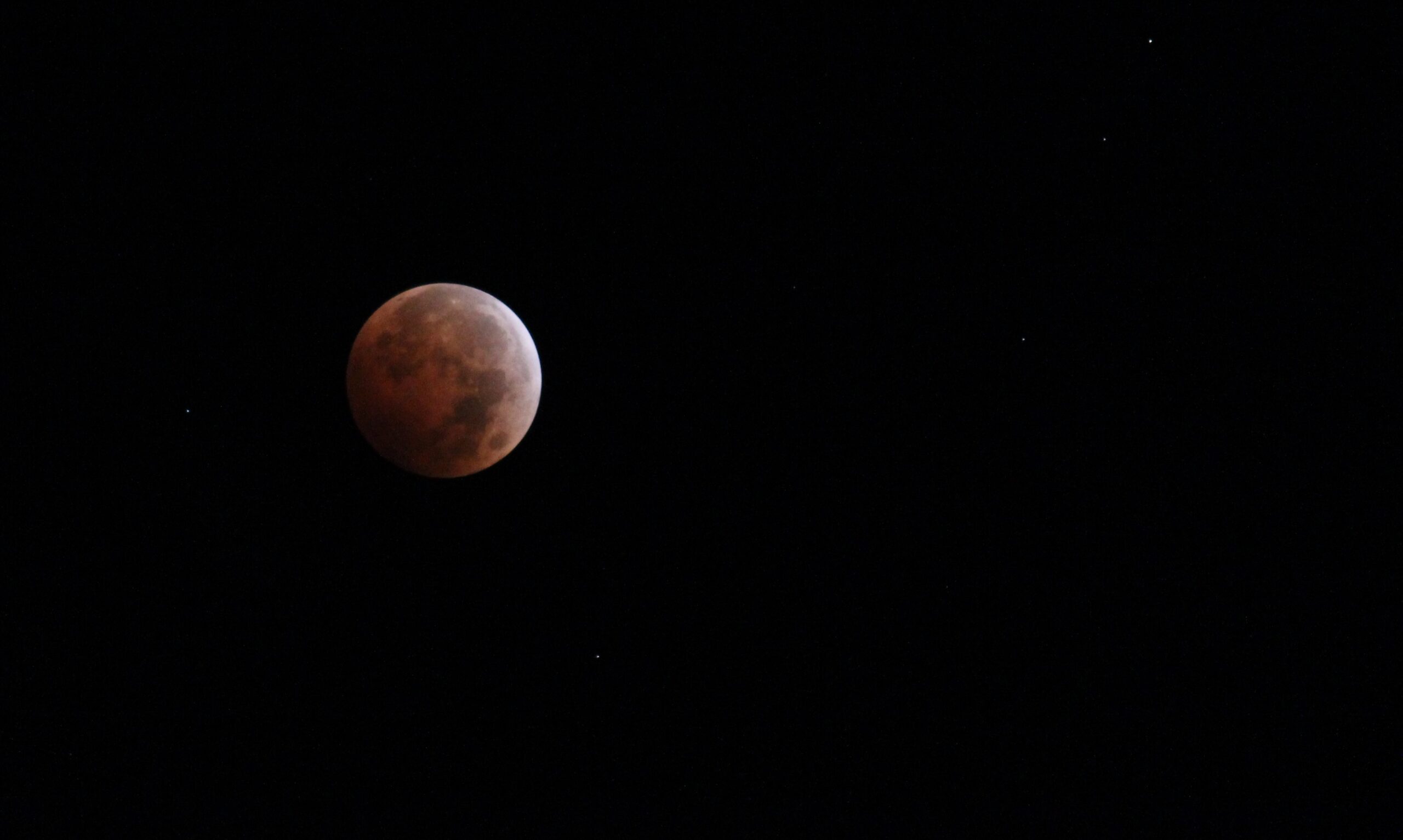 I went out to see the full lunar eclipse tonight. Here on the West coast, the Moon was suppose to rise in time for us to see the whole nearly hour and a half of its full eclipse, but where I was, the Oakland hills and a thin layer of hazy cloud cover kept it out of sight for over an hour.  It did finally clear these barriers, and I was able to spend over 20 minutes gazing up at what I consider one of the most amazing astronomical sights there is.

I know that NASA was live streaming the event, and that amazing photos will appear tomorrow that will dwarf the dim view I was able to get through my tiny binoculars, but for this particular astronomical event, there's just no substitute for seeing it live with your own eyes.

We usually see the Moon as "a disc of radiance inhabiting darkness," to quote the poet Peter Dale Scott (though he was talking about the appearance of the Sun to astronauts in space) but when the Sun's light is obscured by the Earth, the Moon is sufficiently dimmed that we can suddenly see it not as a two dimensional disc, but as a sphere of stone suspended up there in the sky. We can see – we can suddenly feel – its rotundity. In growing darker it somehow also becomes more real.

Now, you will say that the NASA feed and all those photos that will soon be appearing in my Facebook feed will also show this fleeting three dimensionality. However, there is another component to the viewing experience that is absent from the highest resolution photos you can take.

How do I describe it? When you're out there looking up at the eclipsed moon, you feel like you can almost gauge its distance. It's like when you get out of the city, and the star field, which is usually a flat array of pinpricks in night's dark shell, suddenly comes alive, suddenly acquires depth. Some stars are clearly closer and some are less so, but none of them are very distant, and each can be positioned in the void above us in relation to all the others.

This is an illusion, of course. The Moon and the stars are infinitely too distant to fall under the power of our animal depth perception. However, I suspect our brains create this illusion because they know that these things are not projected or printed images, but real objects inhabiting the same space we are, like the basketball hoop ten feet above the ground, or the hummingbird hovering right outside the window, or the fly ball arcing toward our gloves.

And this was the second magic ingredient to my experience tonight. I wasn't just seeing what the eclipsed moon looked like. I was right out there in space with it. It was hanging right there in my sky. In a sense, what made it such an amazing astronomical sight was that it was not an astronomical sight at all. It was just a sight.

The actual light reflecting off of this actual object we call the Moon traveled through the intervening space and into my actual eyes, with no obstructions between us.

If I had been able to reach far enough, I could have touched it.