If anyone's confused by Trump's behavior in the face of the Coronavirus threat, here are the three keys for understanding anything he does:

Trump believed (rightly, at least in the short term) that a virus outbreak would hurt his approval ratings, and so he began by lying about the seriousness of the threat. It didn't occur to him that that would only hurt him in the long run, and even now, when he's trying to say the right things, he can't help sporadically lying about things like the availability of tests.

First of all, the ban didn't include countries where he owns financially struggling golf courses, but that's just a small and (sigh!) now routine feature of his Presidency. The really profoundly self-serving aspect of the ban is that he reframed a public health issue as an immigration issue, reinforcing a xenophobic framework that will always benefit him electorally.

Maybe it's mostly incompetence (and earlier policy blunders such as closing the White House's pandemic response team) that led to the disastrous lack of testing we're now facing, but it's also true that Trump must be of two minds when it comes to testing. One the one hand, he can't enjoy being blamed for the lack of testing — though he did recently declare that he would not take responsibility for that — but on the other hand, the result of more testing would undoubtedly be more cases being discovered, and he hates the idea of those numbers going up.

Yes, the numbers will almost certainly go up even more without proper testing now, but that's a long term concern. Right now, Trump doesn't want to see the numbers — which are supposed to have already diminished to zero by now, according to one of his earliest lies — go up in the short term. Remember him lamenting how allowing a cruise ship with sick passengers to come to port would bump those numbers?

Trump is in an impossible situation, torn between the short term and the long, but the bright side for him is that it simply might not matter, that all his worries about his approval rating are unfounded, because his base will believe anything he says no matter what. The best case scenario for him would be if his base continues to believe his lies about the virus being a hoax perpetrated by his enemies while all the sane people in the country expend their energy doing the right thing to mitigate the virus's effects. We'll be draining our resources preventing the virus from damaging Trump as much as it might, while he whips his base into a delusional fury to sweep him into office a second time.

There is, of course, nothing we can do about this, as we're bound to decent and rational behavior in ways that Trump and his people are not. 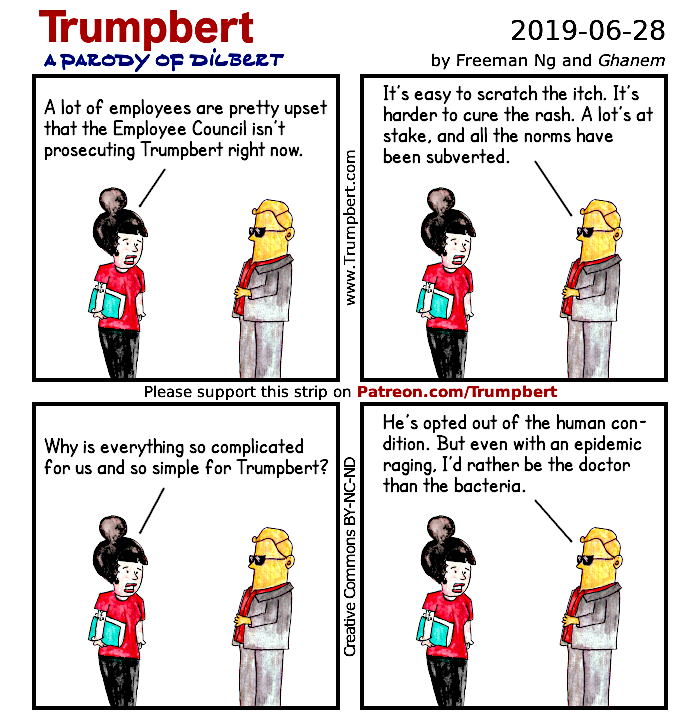 So far, Trump's approval rating is holding steady at the low end of the narrow range it's occupied for pretty much his entire Presidency. His core followers are swayed by very little. But things have not yet gotten as bad as they almost certainly will, despite all our efforts to suppress the spread of the virus. (The scientific consensus seems to be that all the social distancing and sheltering in place that we're doing will only flatten the rate of infection, actually extending its length, but critically lowering its peak, so that hospitals won't be overwhelmed to the point that doctors will have to make life or death decisions about which patients will get to use the ventilators and which will die.) Then we may see some cracks start to appear.

Trump's base has an authoritarian bent that leads them to seek out a strong leader to mindlessly follow, but his waffling between short term and long term concerns is making it harder and harder for them to avoid significant cognitive dissonance.

Let's never forget what the reelection stakes are for Donald Trump: If he doesn't get reelected, he probably goes to prison. If he gets another four years of immunity from criminal prosecution, he probably outlasts the statute of limitations on his past crimes. (As long as he doesn't commit any more in the future.) We need to take this into account in every evaluation of how far he might be willing to go to win in November.

I won't be surprised if he attempts to leverage the virus into some form of voter suppression, perhaps finding a way to make voting even harder for minorities or the young, or even postponing the election, depending on the state of the virus and the polls at the time.